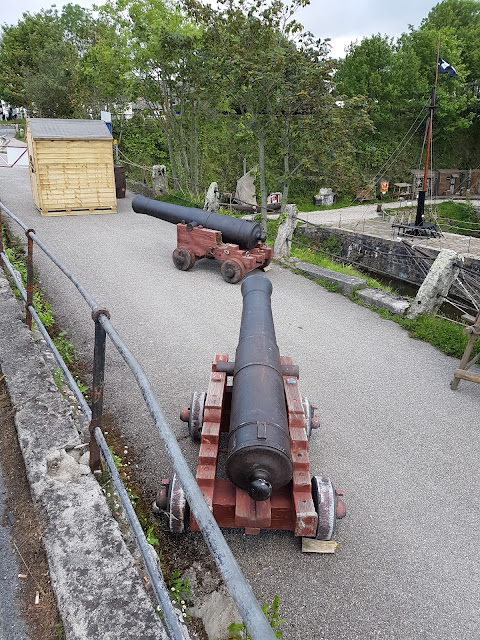 Welcome once again to Bollards of Britain where today I intend to settle an old argument debate about 'Cannon' bollards. Do they exist or is this just another urban myth/tale that is told so often that it becomes "the truth".

Well by pure chance I happened to be in Charlestown the other week which is part of the 'Cornish Mining World Heritage Site' and come across these two mighty cannons. If you do happen to visit Cornwall Charlestown is well worth a visit. Back to the cannons, let us take a close look at the barrel body of the cannon notice the flared end of the cannon where projectile, cannon ball would be placed/rammed and finally exit but also note the the larger tapering end finished off with a near ball like end/shape called a cascable.

Over many years collating pictures/photographs for my original blog 'Bollards of London' I've come across examples of both the ends of a cannon depending which way cannon was planted on street/road. Another clue to whether a bollard was an actually cannon is the sighting of the trunnions. What are trunnions you may ask ? Well they are the supporting cylindrical projections on each side of the cannon/body (above) that allow the cannon to be placed/pivoted on the wheeled wooden frame.

So I believe that some bollards are cannons but it is always helpful to be able to back up a belief/theory with further harder evidence. Let me introduce you to Mr Martin H Evans and his superb work 'Old cannon reused as bollards' which proves beyond doubt that many were planted upon our streets and roads.

I do believe that bollards/cannons planted on our streets/roads created the division we now see everyday called pavement and roads, so were bollards the forerunners of the kerb ?